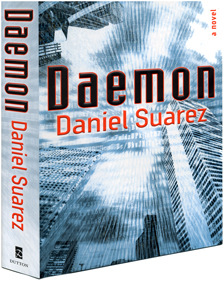 I was given a copy of Daemon written by Daniel Suarez from my blogger friend Henrik Ahlen, which I read almost immediately, very captivating, and something to do while my new-born daughter was up all night with stomach pains trying to get to sleep on my shoulder 🙁

The book is very well-written, and with-out the techno nonsense that some SF (or “Cyberpunk”) authors tend to. It’s a tech novel, and there are a lot of technology but they are not obsessive or inaccurate as some authors in this space. But most importantly it’s a good and exciting story, and as an old fan of William Gibson and Niel Stephenson, this book stands out and is a recommended read (and much better than some of the 90th’s cyberpunk authors). I think and hope there will be a sequel to this book, and that we will see this as a movie soon.

The underline of the story tells a story of our society being extremely vulnerable and dependent of technology, and how the nation-wide borders have been replaced by a global economy for good and bad.

Now the good of the globalization outweighs the bad in the real world, IMHO, but the books shows how vulnerable our global world is to non-nation threats and how badly we can deal with-them. The 911 and terror attacks since then also shows this, malicious nations are fairly easy to target and defeat, the small enemy with-in is much harder.

This is Daniel’s first book, and if he keep’s up this level, I think Michael Crichton should watch out!

Want to join the discussion?
Feel free to contribute!

SIME and change, either your part of it or your out! Just out from MacWorld Expo: Macbook Wheel
Scroll to top